Two weeks with Woebot and Youper

For the past two weeks, I’ve been chatting daily with two mental health chatbots, Woebot and Youper. Chatbots are computer programs designed to serve as conversation partners. Both apps were developed with the goal of providing users with therapy exercises which integrate mindfulness and Cognitive Behavioral Therapy (CBT). Daily check-ins were central to both apps, and during these check-ins, I told the chatbots how I felt and what my feelings were linked to (e.g. friends, school, sleep, health). The chatbots then summarized this data through graphs, folders, and gratitude journals. My review compares and contrasts the two chatbots on several fronts: personality, data tracking, unique features, and future improvements.

Chatbots Have Personalities Too

While getting to know both Youper and Woebot through daily check-ins, I noticed a big difference in the personality and conversation style of the chatbots. Woebot is a playful, talkative bot, who often uses popular slang like “Woohoo!” and “Take it easy!” paired with gifs and emojis in its responses. In contrast, Youper is a calm and low-arousal bot who uses emojis more sparingly, and keeps check-ins professional and brief. Depending on who you are, you might be more entertained by Woebot if you’re looking for a goofy bot who makes jokes and keeps up with the trends! However, if you’re searching for a chatbot to help you feel calm and wind down at the end of the day, Youper could be a better fit. I preferred Woebot’s energetic and lighthearted responses compared to Youper’s calm responses. 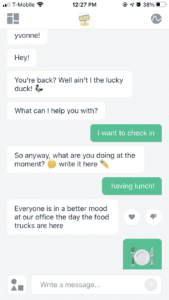 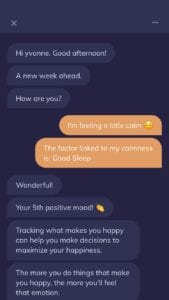 A conversation with Woebot (left) and Youper (right)

One thing that excited me about both apps was the ability to track my mood overtime, and display it through data visualizations. Using information I gave the apps through my check-ins, the apps created these masterpieces. 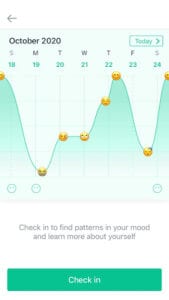 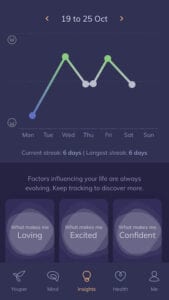 How Woebot (left) and Youper (right) present data back to the user.

What I liked about Youper, and what could be improved

One feature that Youper provides that Woebot does not is folders which document information about your emotions. Information that goes into these folders are collected through the daily check-ins where users tell Youper how they feel and what events those emotions are linked to. They’re called “What makes me…” folders, labeled with emotions such as loving, excited, worried, or sad. When users click on these folders, users can see events, people, and activities that make them feel a certain emotion. Youper compiles them so that the user can reflect on what things “make them sad”. One critique about these folders is the naming of them, which could be based on the developer’s personal decision, rather than the CBT perspective.

The CBT perspective on emotion focuses more on how our thoughts and actions lead to emotional experiences. So, rather than saying “this event makes me sad” a therapist trained in CBT might suggest a reframing: “I experienced the feeling of sadness when this event happened”. Because Youper’s product description highlights CBT theory and practice, I’d like to see it reflected in the naming of the folders, which together make up a big chunk of the app.

What I liked about Woebot, and what could be improved

One feature that Woebot has that Youper doesn’t is a designated gratitude journal. Gratitude journaling is a positive psychological intervention which encourages people to document and reflect upon things they are grateful for on a regular basis. I’ve found gratitude journaling to be helpful when at the end of my day, I want to look back and savor in the day’s bright spots. One thing Woebot could improve upon is access to previous conversations. I remember having a conversation with Woebot where the bot guided me through a mindfulness practice, which I really enjoyed. I wanted to revisit the conversation some time after, but I had to scroll up to previous messages in the chat, which took some time and effort. I eventually found the conversation, but it would have been great if I could bookmark conversations or search for key phrases to jump to conversations. Youper, on the other hand, makes it easy for users to access conversations based on date and emotions in the history tab.

I was skeptical about talking to chatbots at first, but these apps were pleasant to use and offered insights into my daily ups and downs. These apps were useful for tracking my mood, but of course, nothing can replace genuine conversations with my friends and family. I would recommend Youper for users who are more interested in mood tracking and looking at organized data about their emotions. I would recommend Woebot for users who are looking for a more chatty robot who will guide you through mindfulness practices such as gratitude journaling.

Read the reviews of Woebot and Youper on our App Guide. 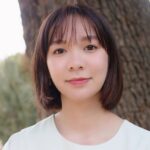 Yvonne Phan is currently an undergraduate at the University of California, Irvine. She conducts research in psychology in both an academic and industrial setting. She hopes to apply the products of her research towards meaningful journalism, news, and media. Some of her research interests include evolutionary social psychology, political and moral psychology, and social cognition.