“Re-opening.” A word that has been on our minds for months now. We were open, then we were closed, then open again, only to close again, and then maybe open….. Re-opening is not an easy task, and we must consider many risks and benefits. Many of us are asking, “What risks are we willing to take?” For those in the Obsessive Compulsive Disorder (OCD) community, this question has been on their minds since their OCD first appeared in their lives. Individuals with OCD are great at asking many “What if..” questions, and paying attention to only the worst possible outcomes – it is just the nature of the problem.

For those with OCD, these fears come in many forms. While we may think of OCD as either fear of getting contaminated or needing to put things in a certain order, OCD can be far more insidious than that. Imagine that you love your dog more than anything else in the world. Once OCD learns this, it will start to introduce thoughts into your head like, “Come on…you hate that dog.” Or, when you are in the kitchen chopping up some fruit, OCD might pop an image of you stabbing the dog into your mind, or it may even convince you that you actually have the urge to do it. And, it does not do this just once a day – it can be hundreds of times a day that you have these obsessions.

Therefore, when we hear in the media, as I did a few months ago, “Wouldn’t it be great if we all had a little OCD right about now?,” — the answer is a resounding NO. No one wants a little OCD, and no one should want anyone else to have a little OCD either.

The gold standard of treatment for OCD is something called Exposure and Response Prevention Therapy (ERP). In ERP, we ask people with OCD to expose themselves to their obsessions (their intrusive thoughts, images, and urges) and then ask them to sit with them and not engage with the compulsions that they normally do to try to neutralize the obsessions (Response Prevention) . We do this gradually, building up from lesser fears to their most intensely feared thoughts or images or urges. In doing this, we are asking them to take a leap of faith – to trust that just because they think something in their mind does not mean that it is real or it will come true.  Eventually in treatment, we would want someone to go ahead and chop some vegetables in the kitchen while their dog is in there, and have them feel the fear and discomfort, but also learn that just because they have a thought, image or urge, does not mean that they are going to follow through with it.

Individuals with OCD have had some interesting insights into the COVID-19 experience. Some have told me that they have been preparing for this their whole lives, so this is now justification for all the work that they have been doing trying to stay safe and contaminant free. Others have said that they just do not pay that much attention to it, because they have a type of OCD that is not germ or illness related. Still others have wondered how they might be able to deal with all the other additional stressors going on in their lives (economic, school for their children, job security, etc.) which seem to compound their OCD.

If we are going to re-open, we can take some lessons from the OCD community, who have taught us, in the bravest way possible, how to face fears and how to learn to live with discomfort and doubt. All of us will have to do something similar in the coming year. We will have to take this leap together as we re-open. We will have to gradually leave the comfort zones that we have built around ourselves and be able to get back out into the world.

If you have OCD and you want assistance for your condition, please feel free to reach out to NOCD. At NOCD, we have a teletherapy service ready to work with you and help you learn to manage your OCD with ERP. Further, we are continuously working with insurance providers around the country to try to get your therapy covered by your insurance. You can download the NOCD app for free – we hope to see you in the community soon.

Here are some more apps that can support people living with OCD: 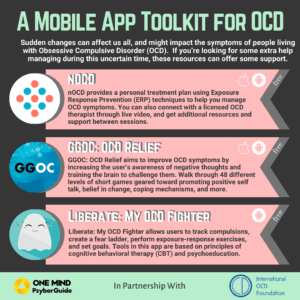 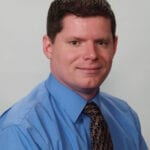 Dr. Patrick B. McGrath, Ph.D., is Head of Clinical Services at NOCD, the largest on-line community for individuals with Obsessive Compulsive Disorder (OCD). Dr. McGrath is in charge of the NOCD teletherapy network and the training of all of the NOCD therapists. Dr. McGrath is the author of The OCD Answer Book and has been featured in numerous media outlets across the country, including being a consultant for Hoarding: Buried Alive.