Where Twitch Can Help With Mental Health

Twitch is a live-streaming service where anyone can become an interactive broadcaster, responding to live chat discussions with their audience (usually referred to as “community” on the platform). It is best known as the home of e-sports, battle royal-style competitions in video games. With 4.5 Million streamers and 1.27 Million viewers active monthly, Twitch has become an international home for people looking for interactive live entertainment. According to the WHO, globally 300 million people of all ages suffer from depression; so chances are, those numbers will intersect.  Moderate video game playing (meaning playing video games in a manner that is not disruptive to regular day-to-day activities) has been shown to assist emotional regulation. There are also players who excessively use gaming as an escape and may even become addicted, and although this number is much smaller, it’s likely that these people can also be found on a gaming website that runs 24 hours a day, streaming live game play (and more). I see four main ways that Twitch can provide mental health support to those interested in gaming who are experiencing mental health distress.

Twitch puts a huge emphasis for its creators on foster welcoming communities within the chats that are held as people watch gameplay or artists, or just chat with other users. Twitch calls a streamer’s group of fans “communities”, which implies a type of cohort that is close to a support system. As a regular viewer of a particular streamer’s live show, you can get to chat to a certain group of people instantly and consistently. Over time, relationships are built and stories are shared. Communities continue to evolve based on mutual interest – be it the game or the streamer—and people start to feel close enough to share personal concerns, even the ones relating to mental health.

Connecting with other people is incredibly important to our mental wellbeing. The idea that there is a loneliness epidemic has been expressed several times by psychologists and reporters alike. Having an open space where you can go and find people with similar interests as you, like Twitch, may help. It might not be an in-person meeting, but it is still a human connection in a world increasingly suffering from individualism.

Distraction/escapism at any time of day

Twitch has taken the place that newspapers held at the turn of the previous century and television did at the end of it. Unlike your old, overpriced cable package, twitch is a service that is on all of the time, without breaks, all around the world, for as little as $4.99 a month. When the video game console becoming a household staple back in the 1980s, along with it came socialization in the form of sitting on a couch near someone, or playing along with someone as they complete a game. Now imagine that experience, except you also have access to do so with a variety of people at any given moment. The options are limitless and the resulting mental health benefits, boundless.

A sense of belonging enhances our health overall, but especially if we feel accepted in the group we are craving approval from. Twitch has a directory established based on game played, topic of discussion and even creative endevours.  Quite a few streamers are on at least three days a week, per twitch’s set up goals for broadcasters, which means that viewers can visit and re-visit their favorite entertainers and develop relationships with them through the screen. Based on this directory and this consistent engagement, one can find precisely the kind of chat room and live stream where their interested would be shared, satisfying our need for social belonging.

The issue is more about which channel to stop on. Considering the aforementioned 4.5 million broadcasts monthly, with numerous categories to choose from, whether you want to have a serious discussion, or enjoy the escapism that comes from watching someone play a game, you can find your desired entertainment/escape every time. Loneliness—checked. Escapism and means for emotional regulation—also checked.

Mental health Advocates on the platform

The live, virtually anonymous interaction on the site makes it appealing for people to have deeper discussions on subjects that might otherwise be hindered by stigma. The bad part of this is that sometimes people in distress will come to the platform seeking help from ill-equipped streamers. To deal with this, the platform has been setting up resources for streamers to use when such a person arrives in chat. When prepared, these otherwise ill-equipped streamers could save a life by directing the suicidal individual to relevant resources.

Through Twitch, various mental health professionals and advocates are also being given a public platform to raise awareness. This means more information is available to individuals who need help managing their own mental health, as well as those who can support them. Communities are born when streamers like Dr. Julie Gurner, Dr. Mick or myself use the platform to hold discussions that eventually break down stigma and barriers of communication. Viewers can ask questions, including ones about how to prepare should someone who is not feeling well appear in a chat.

While giving out professional advice in such a setting is not legal, offering support and encouragement is, and due to the live nature of the platform, this happens easily. Like everything else moving online we will have issues with regulation. Still,  mental healthcare has a ways to go to catch up in the digital landscape. Twitch is bringning new avenues to make this possible. 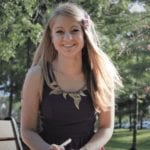 Marie Shanley is better known as Mxiety, a mental health advocate, writer, and Twitch streamer. She has a background in scientific editing and project management. Her goal to bridge the gap between professionals and those living with mental illnesses by curating resources, personal stories, and accessible information.