Beating the Blues: A Professional Review 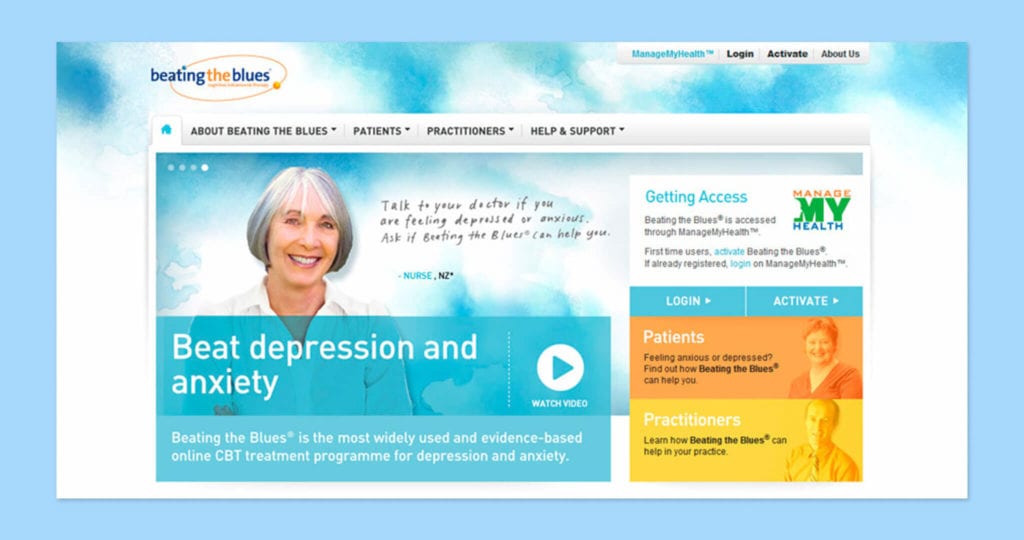 This review is for the Self-Guided UK Version of Beating the Blues.

Beating the Blues is an online cognitive behavioral therapy (CBT) course intended for people facing stress, anxiety, and depression. Beating the Blues consists of a series of voiceovers from a clinician, videos of archetypal patients, online fill-in-the-blanks forms, worksheets, and psychometric assessments. Users complete eight lessons, each of which is approximately an hour long. Concepts are taught by the narrator, shown with illustrations, and then put into action by the archetypal patients. Weekly projects are assigned, and the narrator asks the user each week about the extent to which projects were completed and the extent to which the user has committed to completing the next week’s projects.

The five archetypal patients presented by the program consist of three people filmed during therapy and two filmed after therapy. The people in therapy are a teacher who is overwhelmed by his job and depressed, a single parent with two children and financial issues who feels depressed, and a widow who is tearful and depressed after the death of a close friend.  The two people interviewed after therapy are a man who is worried about being laid off who has started experiencing pains in his chest and arms, and a working mother who is suffering from panic attacks after a car crash. Having five archetypes may be helpful to users, as users can selectively watch other similarly-situated individuals.

Beating the Blues is very intuitive to use, although its user experience is in many places less than interactive. Users are frequently required to listen to a narrator speaking while viewing illustrations. It is not possible to fast forward the narrator. Once the narrator finishes, a large button labeled “Continue” becomes available, and the user must click it to move on. Users are able to jump to sections of lessons when reviewing them. Fortunately, after leaving the program mid-lesson, users are also able to resume it roughly where they left off.

In each lesson, users are asked to rate their current level of anxiety and depression, whether they have had any upsets or disappointments during the week, and whether anything has happened to improve the situation. The narrator provides a canned response, reassuring the user if nothing has improved and congratulating them if it has. The interactions with the narrator at the beginning of each lesson are the same, which may lead some users to find the process to be repetitive.

Throughout the program, Beating the Blues periodically opens a dialog box in an attempt to print out worksheets. The worksheets are very mildly customized, as they all include the user’s name. They do not incorporate the user’s textbox-based responses to questions throughout the program. As a result, the customization reduces the anonymity of the worksheet, but does not contribute to them being more helpful. The program incorporates more substantial tailoring in one way, in that it asks users to pick a program that they wish to work on solving. More information is then provided about that specific problem, and it shows up again in the assigned project for the week.

In many places throughout the program, users are required to watch videos of at least two of the five archetypal patients. While this may be helpful to some users, others may find that watching the archetypal patients can be stress-inducing to the extent that they empathize with the patients.

Beating the Blues has a completely web-based interface. The content is primarily delivered through webpages containing videos, text, multiple choice questions, and fill-in-the-blank questions. The site is intended to be viewed in a browser running Flash. While it worked well in Chrome on a Windows 10 computer, it was unable to run on an iPhone properly. No iPhones are capable of running Flash.

The content is appropriate for a person experiencing anxiety or depression. As a result of the nature of the archetypal patients presented, the content is suitable for adults, but is unlikely to be relatable for children or adolescents. A broad spectrum of adults is presented: someone concerned about work – and someone concerned about retirement, a family man – and a widow.

The feedback provided may not be adequate for some users. The program asks users to respond to various open-ended questions, and in many cases does not appear to do anything with the input it receives. In other cases, the narrator gives a canned response. Many of the canned responses repeat between lessons, making them feel less realistic than if they differed slightly. Unlike some other cognitive behavioral therapy programs, there is not an emphasis on asking quiz questions.

Beating the Blues presents video, audio, and written content, and then asks users to contemplate various aspects of their lives. The cognitive challenge comes from the contemplation. The software requires the user to be able to read, as a substantial portion of the content is written.

It was not possible to enroll in the U.S. version of Beating the Blues, so the UK version was tested. When buying the software, users receive an activation code which may be used to create an account. Users are asked to provide their full name and date of birth. An email address and telephone number may optionally be provided. Subtitles may optionally be enabled for the audio portions of the program. While users are asked to provide a security question and answer for use in the event of a forgotten password, the program does not ask the security question when a user attempts to retrieve their password. Instead, the password is emailed in an unencrypted form to the user. This makes the user’s password more vulnerable, as many people remain logged into their email applications when not at their computers and use the same password across multiple websites.

Beating the Blues has been the subject of numerous scientific papers, as it has been available for over a decade. Its level of user acceptance was evaluated through formal beta testing.[i] Several subsequent studies on user acceptance have been conducted.[ii],[iii],[iv],[v] Beating the Blues has been shown to produce better outcomes for patients facing anxiety and depression than treatment as usual in one randomized controlled trial.[vi] The cohort of the trial was expanded, and a second study found that the efficacy of the program was unaffected by concurrent drug treatment, duration of the pre-existing illness, severity of the existing illness, or the treatment setting. Significant improvements in anxiety were only realized by patients scoring 18 or more on the Beck Anxiety Inventory (high anxiety) upon initiating the program.[vii] A further study found Beating the Blues to be cost-effective, relative to usual care.[viii] Beating the Blues has additionally been shown to be effective for people with physical comorbidities[ix] and for depressed students receiving higher education[x]. As a result of this research, Beating the Blues has been reviewed and endorsed by the National Institute for Health and Care Excellence (NICE), a government institution in the United Kingdom which is internationally known for its evaluation of healthcare interventions.[xi]

The program is based upon CBT techniques which are widely known to be efficacious. However, it is only likely to help people who sufficiently engage with it. Other tools may more effectively engage users. As there are eight weekly sessions and homework assignments, user engagement is essential for the program to be effective. It does not appear to be possible for American self-guided users to purchase the program. While the UK version is available, it may be mildly less efficacious in the U.S. due to the slight social distance which is created by the Britishness of the content.

The relatively poor interactivity of Beating the Blues may cause some people to disengage with it before completing the program. The inability to fast-forward may likewise be discouraging for some users. While email reminders are sent to encourage people to re-engage each week, there is no formal mechanism for peer support or clinician support in the self-guided version. In contrast, Good Days Ahead and SuperBetter both have users enlist helpers to encourage them as they receive CBT training. FearFighter also makes use of multiple archetypal patients and is slightly more interactive. However, Beating the Blues is more affordable than FearFighter.

Click here to read more about Beating the Blues