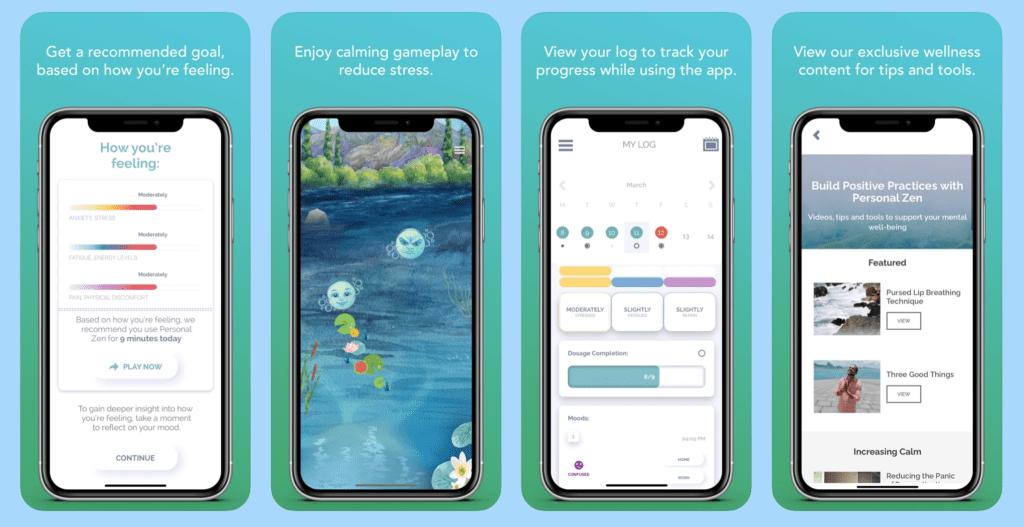 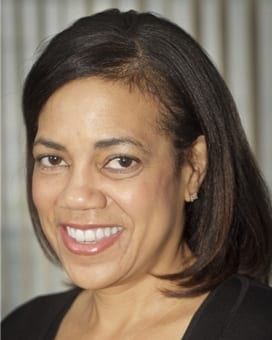 Anxiety disorders are the most prevalent mental health disorders with up to 33.7% of people experiencing an anxiety disorder at some point in their life.  Anxiety disorders are undertreated and associated with extensive health care costs.[i] Persons who experience problematic anxiety tend to focus attention on perceived threats and negative consequences. This negative attentional pattern perpetuates stress and anxiety.

Personal Zen is an easily accessible, gamified mobile app, designed to reduce anxiety and stress in daily life.  The Personal Zen App approach to treatment attempts to change this attentional pattern thus reducing stress and anxiety. The app engages users in a gamified version of attention bias modification training. This game redirects the user’s attention and focus towards positive stimuli, while training the user to disengage from perceived threats and negative stimuli. The ultimate goal of Personal Zen is to transfer attentional practices, obtained with game play, to everyday life situations. By applying this practice to everyday life, the user could experience a reduction in daily stress and anxiety symptoms.[ii]

Personal Zen is free and available in the iTunes app store for Apple iOS devices. Its gamified approach is novel, differing considerably from traditional treatment practices. It increases the accessibility of attentional bias modification training by making it available for mobile devices. In addition, the user may receive benefits of stress reduction while using an app that might be associated with less stigma when used in different public spaces.

The Personal Zen App requires iOS 7.1 or later.  The app logo contains the Personal Zen happy sprite icon which is a large, and colorful character.  Upon launching the app, the game plays pleasant spa-like music and immediately begins by presenting two mood-contrasting sprites – a happy sprite and an angry sprite.  The sprites quickly disappear from the app screen by burrowing into separate holes.  After the sprites burrow underground, the user must ignore the burrowed angry sprite and attempt to trace the happy sprite’s path.  Rustling landscape grass identifies the paths created by the sprites.  Upon successfully tracing the happy sprite path, the app displays a reward emblem and emits a corresponding pleasant sound.  After successfully completing several play rounds, the game concludes by displaying the Stage Completed sign. By receiving repeated in-game rewards and positive reinforcement, the user learns to shift attention away from potential perceived threats and instead shift attention towards positive cues, thereby decreasing stress and anxiety.[iii]

The participant may play one game or multiple sequential games.  Each game lasts for approximately a one-minute interval.  However, there is no game competition, game level progression or game time limit. The app presents enticing and inspiring game titles like: Easy Breezy, Easy on Sunday Morning, Chilling, Zen Master, Unruffled, and Happy as a Clam.

Game play may consist of as many of these game sessions as a user wants for either brief or extended uses.  The game settings suggest weekly play-time goals between 10 to 40 minutes.  The app suggests 40 minutes of weekly play-time for optimal stress reduction.

The app logo design contains an attractive, colorful happy sprite icon. Upon first launch, the animated game begins in portrait mode.  The game design consists of a simple animated touch interface, which engages the user by employing a finger swiping motion on screen targets. The game screen size may be minimized or played on the device’s full screen size.  However, the app does not rotate with the mobile device to landscape mode.[iv]

Personal Zen offers users versatility in different mobile contexts.  The game’s large touch-screen targets of a happy sprite and rustling grass simplify swiping and game interaction.   This design allows easy accessibility while on the go or while feeling stressed. Users may also play Personal Zen at scheduled times, while bored, or during restful times.

The Personal Zen menu tab is located at the left side of the app.  The menu tab lists the categories of: Game, My Activity, Settings, Tutorial, Terms and Conditions and Send Feedback.  Tapping the Game tab reverts the user back to game play.

Tapping the Settings tab opens the user’s goal setting chart.  The chart displays a linear horizontal bar containing a time marker and labeled time intervals, ranging from 10 to 40 minutes.  The user may set the weekly play goal by sliding the touch sensitive time-marker. The app labels the 10-minute level as “Maintain Positive Outlook”.  On the opposite extreme the app labels the higher 40-minute level as “Stress Busting”.  Although the app settings indicate that optimal stress reduction occurs with 40 minutes of weekly play, continuous 40 minute play intervals are unlikely because of user time constraints and game play distractions.[v]

The Tutorial section gives a brief and concise explanation of the game goals: to focus on the positive sprite and thereby reduce stress by focusing on positive stimuli in everyday life.

The Term and Conditions section contains the app rights license, restrictions of use, ownership, trademarks, links and marks, confidentiality and other legal descriptions of app use and restrictions.  The products and services specifically define app use age restrictions. It also defines the limits of clinical use and defines its entertainment goal.

The app menu also contains a tab where users may send feedback to Personal Zen via email.

Personal Zen has a 4+ rating and is void of adult content.  Although the app’s Products and Services section indicates that its use is intended for persons over the age of 18, it seems appropriate for all age use.  Additionally, the Terms and Conditions section indicates that the app is intended only for informational and entertainment purposes.  The app is not intended to medically treat or diagnoses disease or substitute or replace medical advice.  Like most mobile game instructions; users are also advised against engaging in game activity while driving, using machinery or when using mood-altering substances.

Personal Zen is easy to use but requires user concentration and swift motor responses for touch screen interaction with app targets.  Concentration, focused attention, and rapid user response are required to tap and trace the burrowed happy sprite path.  The app requires no previous game experience.  Organic impairment of cognition and motor function may impede game use.

Personal Zen app account use is limited to tracking game play time progression.  The user is not required to register personal or demographic information.  Users may receive app updates by subscribing to the Personal Zen email newsletter.

Prevalence rates of anxiety disorders have remained consistent over the past several years and occur more frequently than other mental health disorders.  Approximately one third of the population experiences an anxiety disorder at some point during their life.  Anxiety disorders are associated with significant impairment and immense health care costs.[vi]   Professional anxiety treatment is underutilized because of costs, treatment accessibility, stigma, and time constraints.

Personal Zen is a gamified app which aims to reduce stress and anxiety.  The app introduces a gamified version of attention bias modification training which has been demonstrated elsewhere to reduce stress and anxiety.  The rationale behind attention bias modification training is that stress and anxiety may be reinforced by cognitive and attentional biases.  Cognitive biases represent a person’s thought patterns and interpretations, which may distort environmental cues.  Attentional bias occurs when a person directs attention towards perceived threats and negative stimuli, while ignoring positive stimuli. Studies have shown a link between cognitive bias and attention biases in anxiety states.[vii]  In theory, ongoing attentional focus on perceived threats and negative consequences promotes anxiety and may reduce attention to conflicting information such as positive information or safety cues.[viii]

Study participants played short and long game sessions of 25 and 45 minutes respectively. The results were compared to placebo groups.  The researchers measured anxiety scores of participants prior to app training and after app training.  Researchers also observed participants performing anxiety provoking tasks after completing the game.[xii]  Participants completing one training session of Personal Zen, of both 25-minute and 45-minute intervals, experienced diminished subjective anxiety and observed stress reactivity compared to those receiving the placebo control. However, only participants receiving the longer 45-minute training intervals experienced decreased threat bias and increased ability to disengage from negative stimuli.[xiii]

A later study, published in April 2015 by Tracy A. Dennis-Tiwary and colleagues examined the impact of physiologic indicators of anxiety.  This study included anxiety-sensitive EEG readings.  In this 2015 study, a single app play session of 25 minutes resulted in improved performance in stress related tasks in females, but not males. Consistent with the early study, attention biased modification training in the 25-minute interval play session did not reduce measures of threat bias in participants.[xiv]

Although these studies found promising benefits of the Personal Zen app, they were conducted under controlled lab conditions and did not include subjects with a clinical diagnosis of anxiety disorder. There is no available data that demonstrates efficacy in subjects clinically diagnosed with anxiety disorder or the impact in real-world settings or daily use.

Personal Zen differs from other anxiety reducing apps by introducing a more visually-appealing and gamified version of attention biased modification training.  Although research studies demonstrate anxiety reduction with Personal Zen game play, there are no available studies which compare the Personal Zen efficacy with other apps purporting to reduce anxiety.  Other apps claiming to reduce anxiety include: SuperBetter, Anxiety Release and Bilateral Stimulation, Flowy, and Phobia Free amongst others.[xvi]  While these apps are intended to provide anxiety reduction techniques, most do not so in a game like fashion.

The Personal Zen app does not include a method of recording anxiety levels for pre and post-game use in the uncontrolled, everyday living conditions of game users.   Also, there are no in-app user efficacy rating scales.  Adding a section for anxiety assessment submission after game play, would be helpful in defining the apps effectiveness in everyday life.  Furthermore, incorporation of a wearable device tool, that can measure physiological anxiety parameters would improve efficacy documentation.

The app is free on the iTunes app store.

More information on the product and how to buy it