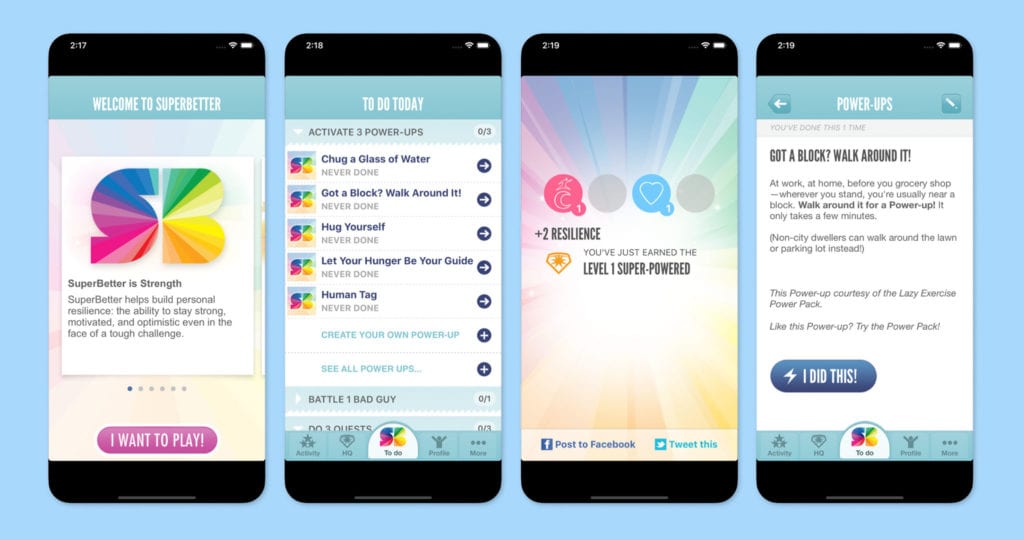 SuperBetter is a game intended to help people improve their physical, mental, emotional, and social resilience. It is designed to serve people with multiple forms of goals, and can be configured to include additional activities related to nutrition, mental resilience, exercise, and social connection. Copying many elements from tabletop role-playing games, SuperBetter players score points by recruiting allies (inviting other people to the platform), doing “power-up” activities, and battling “bad guys” – habits which are harmful to health. Along the way, players can specify the “epic win” they wish to achieve, as well as smaller “future boosts” that they are looking forward to accomplishing in the days or weeks ahead.

SuperBetter was founded by Jane McGonigal, Ph.D., a game developer who had a severe concussion and decided to develop a game to assist in her recovery. As a result, the focus of SuperBetter is on having players engage in a game, rather than on having them read or view materials. The scientific reasoning used to develop the components of the game is present throughout the game, but always hidden behind a link so that it does not dominate the experience.

SuperBetter consists of a series of “quests”, “power-ups” and “bad guys”. Each is a text-based description of an activity for the player to complete and then to acknowledge having completed. A “quest” is an activity that directs a player to achieve something else on the site. A “power-up” is an activity (e.g. hug yourself) which can help improve some form of resilience. Players are asked to complete the activity specified, and then to check a box acknowledging that they have completed it. Each “bad guy” describes a common bad habit (e.g. drinking liquid calories), and then asks the player whether they have been successful in battling it and if it remains a challenge for them.

Throughout the site, there are brief video clips of Dr. McGonigal, explaining how and why SuperBetter is used. These are complemented by a TED Talk which she gave on the science behind the development of SuperBetter.[i] A link to the TED Talk is provided on the site so that players may easily watch it.

SuperBetter is very easy to use, as it contains very few elements in its user interface. It is non-linear, allowing players to focus on activities which are important to them, and to skip ones which are not. As it is used like a game, it may seem very familiar to many users.

SuperBetter has a web-based interface, as well as an app specifically designed for Android and iOS. As the game is essentially a series of text boxes and checklists, the mobile versions of SuperBetter make it easier to continue interacting with the game while performing the activities that it suggests. It is a natural fit for a mobile device, as checking a checkbox is simple on a touchscreen. As it was developed by a professional game developer, it has a very polished user interface reminiscent of a basic Facebook game. On that note, players are able to register with their accounts and to invite Facebook friends to play as well. Registration using an email address and inviting friends to play via email are also supported. The website version of SuperBetter was tested in Chrome on a Windows 10 computer and the native app version of SuperBetter was tested on an iPhone 6s running iOS 9. Both performed flawlessly. The app version is in many ways more game-like, as it includes sound effects and animated transitions between screens, while the Web version is more static.

SuperBetter is intended to help people achieve changes and goals, beat depression, overcome anxiety, cope with illness and pain, recover from post-traumatic stress, and overcome life’s challenges. It is a general tool which is multipurpose in nature. The content is appropriate for most people – with and without a known mental illness. As it comes with different “power packs” of content focused on different types of resilience, players with different needs can tailor the content so that it is appropriate for them. Furthermore, as SuperBetter is non-linear, players can selectively engage in the activities suggested by the program which best meet their needs and goals. Users are likewise able to develop their own quests to use alongside the ones which come with SuperBetter.

SuperBetter does not provide direct feedback. However, it contains a daily wellness questionnaire and a weekly “Superbetterness” questionnaire which are used to assess players’ progress. These are custom instruments which do not replicate the PHQ-9. Instead, they assess the percentage of the time the player is happy, as well as the player’s resilience. Despite not providing players with direct feedback on their thoughts and actions, SuperBetter provides players with frequent feedback on their engagement. As SuperBetter is intended to be a game, it awards players points for enhancing their physical, mental, emotional, and social resilience. These points are awarded for completing each of the activities within the program and are prominently shown at the top of every screen.

Players can be provided with personalized feedback by inviting an “ally” to join them in their quest to get SuperBetter. Allies can login to SuperBetter and view their friend’s activities on the site. Allies can leave their friends comments and suggest power-ups and quests for them to achieve. The site contains an additional set of videos specifically devoted to training people to be allies. Allies have the ability to provide active, constructive responses to the player they are assisting and can award them “achievements” on the site. Allies are encouraged to “like” and comment upon the activities of the players that they are supporting, and to additionally meet with them in person when possible. Players may additionally discuss their interactions with the site and journey to wellness with other players through an online discussion board.

Engaging with SuperBetter requires the ability to read, but no other skills. The program spends little time teaching players about psychiatry, and instead encourages them to engage in specific activities. Some of the activities present a cognitive challenge, as they require introspection. Other activities, such as drinking a glass of water, do not.

Players may register instantly using their Facebook identities, or less rapidly using their email addresses. In both cases, minimal information is required to register and the process is easy.

There are two peer-reviewed studies which have evaluated the efficacy of SuperBetter. The first randomized participants to either a waitlist, a version of SuperBetter focused on using cognitive-behavioral therapy (CBT) and positive psychotherapy strategies to target depression, or a version of SuperBetter focused on self-esteem and acceptance. After a month of using SuperBetter for ten minutes per day (or waiting), participants who used SuperBetter reported fewer depression symptoms on the Center for Epidemiological Studies Depression questionnaire (CES-D). There was a slight difference in the performance of the two versions of SuperBetter which favored the general (non-CBT) version, but the difference was not significant.[ii] The SuperBetter site additionally reports that a clinical trial funded by the National Institutes of Health found that SuperBetter improves mood, decreases anxiety and suffering, and strengthens family relationships during recovery and rehabilitation.[iii] At the time of the writing of this review, the National Institutes of Health reported that the study was completed in April 2015, but that no results had been posted.[iv]

SuperBetter is likely to be somewhat efficacious in getting people to establish and work towards goals, carry out the activities of daily living, and to socially engage with others. While its role in addressing specific mental illnesses may be more tenuous, the engagement with the world that it promotes is likely helpful for everyone. Much of the curative power of SuperBetter likely comes from its facilitation of a therapeutic relationship with an ally. Its creator, Jane McGonigal, has a twin sister who is a psychologist. When the prototype of the site was built, Dr. McGonigal designed it so that her twin could be her ally and support her on the journey to wellness. People without pre-existing close social support may have less beneficial experiences with the site, as most of the feedback it provides comes through the ally selected by the player.

SuperBetter is a less targeted intervention than many others intended to assist people facing anxiety or depression. It does not teach any lessons regarding a specific mental illness, but instead focuses on boosting resilience and increasing engagement with life. SuperBetter has the potential to enhance other targeted interventions which more directly address specific mental illnesses. Surprisingly, when SuperBetter conducted a randomized controlled trial in which they compared the efficacy of a version of SuperBetter which focused on cognitive behavioral therapy (CBT) with a version of SuperBetter which focused simply on “being awesome”. The version which did not focus on CBT led to better outcomes (although the difference was not significant).ii This suggests that a non-CBT approach is not inferior, and potentially may be a welcome addition to an intervention involving CBT.

SuperBetter is free. A companion book, SuperBetter, is additionally available for purchase. Owning the book is not necessary to use the program. The paperback version of the book has a list price of $17.00, but may be available for a lower price from some vendors.

More information about the product and how to order it