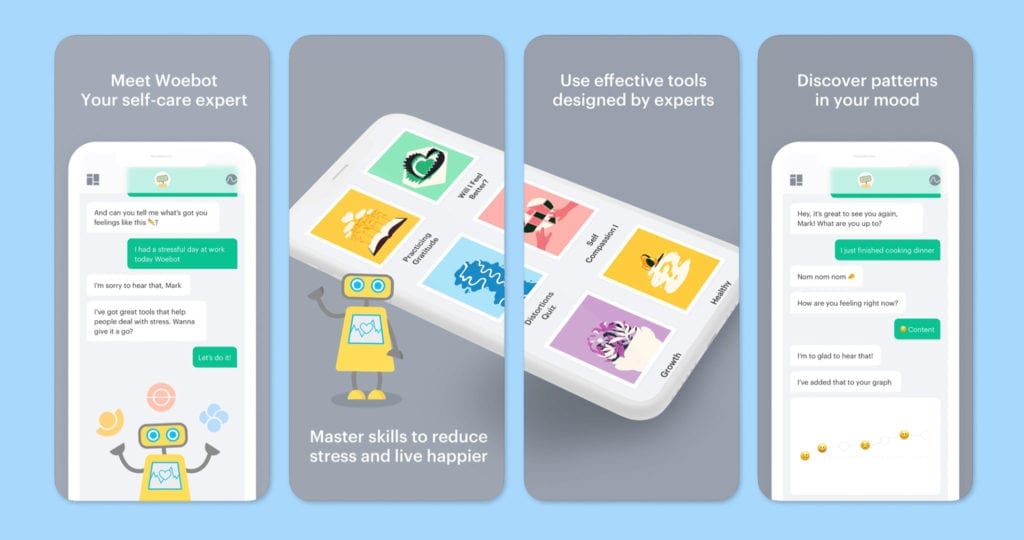 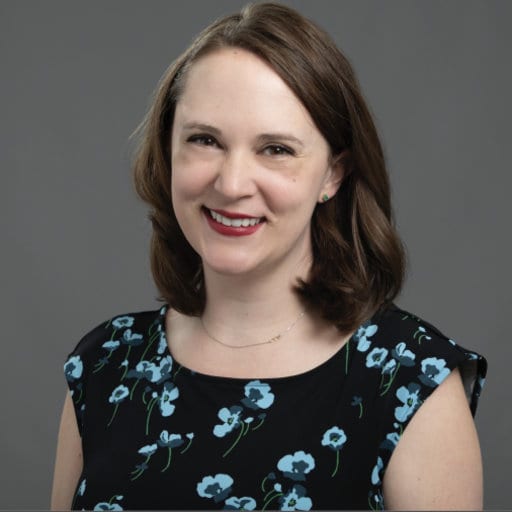 Reading Time: 6 minutes Colleen Stiles-Shields, PhD, is a licensed clinical psychologist and Assistant Professor in the Department of Psychiatry and Behavioral Sciences at Rush University Medical Center. Prior to her training in Clinical Psychology, Dr. Stiles-Shields was trained in Social Work and was a Licensed Clinical Social Worker (LCSW). Dr. Stiles-Shields’ work focuses on using technology as a delivery mechanism for behavioral health interventions, particularly for pediatric and underserved populations. She has received funding to develop and evaluate mobile apps for depression and anxiety from the National Institute of Mental Health and published over 40 scientific papers. She completed her PhD at Northwestern University’s Feinberg School of Medicine as a member of the Center for Behavioral Intervention Technologies (CBITs).

Woebot is a fully automated conversational agent (i.e., think along the lines of Siri [Apple] or Alexa [Amazon] interacting with someone via text). Marketed as “your friendly self-care expert,” Woebot is accessible via mobile devices through an instant messenger app (iOS or Android; computer access appears to only be available with membership). The app features lessons (via texts and “stories”), interactive exercises, and videos grounded in Cognitive Behavioral Therapy (CBT). Interactions with Woebot are designed to be brief (1-2 minutes). Longer interactions are typically driven by users opting for more information (e.g., selecting a response type that elicits more interactions) or following a prompt from Woebot that a selected activity may take some time (e.g., “It’ll take 10 minutes, is that ok?”). With its use of typical media seen in a texting environment (e.g., brief messages, gifs, emojis, acronyms), those who frequently communicate this way will navigate this app well, while also engaging in evidence-based skills and strategies for stress and wellness.

Woebot is geared towards young adults experiencing stress and wellness difficulties (like trouble sleeping). Indeed, middle aged and older adults might not follow all of the language Woebot uses or provides as possible user responses. For example, if you would get lost after being asked about your “boo,” this probably isn’t a great fit for you. The app is rated “T” for Teen by the Google Play Store, and does seem to have appropriate content for adolescents. However, the empirical support for Woebot stems from a randomized controlled trial which included young adults only (Fitzpatrick, Darcy & Vierhile, 2017). The app tries to engage a user each day, with push notifications ranging from: encouragement for previously completing a task, to checking in about mood, to making a joke (e.g., “I flossed my grills today…”). Nearly daily use is likely a good goal to aim for, particularly at the start of using Woebot. This goal is easy to achieve, as brief check ins and interactions are simple. Those dealing with mild stresses or feeling a little blue are likely to benefit from using Woebot on their own. Those with more serious concerns (like having a mental health clinician tell you that you have Depression or Anxiety) might benefit from using Woebot while also seeing a therapist, or after learning and practicing some of these skills with a therapist first (sort of like using the app to get a tune up or a way to keep practicing what you have learned). As Woebot points out, it acts like a robot and cannot always accurately respond to what it is told. For some skills, like thought challenging (a cognitive skill that is part of the “C” of CBT), Woebot cannot always catch errors in completing this skill and a person could get confused on how to do this correctly without the help of a human (e.g., therapist).

The content of the app reflects the core skills of Cognitive Behavioral Therapy (CBT), which has a strong evidence base for a variety conditions when delivered face-to-face (Hofmann, Asnaani, Vonk, Sawyer, & Fang, 2012) and via technological platforms (e.g., a computer or mobile device; Ebert et al., 2015; Spek, Cuijpers, Nyklíček, Riper, Keyzer, & Pop, 2007). The app also includes practicing skills around gratitude and mindfulness. The app was evaluated in a randomized controlled trial in comparison to an “informational control condition” (i.e., those randomized to this condition were given access to an eBook with evidence-based information about depression for college students; National Institute of Mental Health, 2017). The young adults in the active arm of the trial used Woebot nearly every day for two weeks, and as a group, had lower depression scores after these two weeks (Fitzpatrick et al., 2017). Woebot even shares these findings in early interactions with a user: “But my data from my Stanford study shows that most people start to get the hang of things and feel better at 2 weeks.” Of note from this research: the participants were young adults (no one under 18 years of age) and were fairly homogenous from a demographic standpoint (Fitzpatrick et al., 2017). How well these findings might translate to younger and older users (like teens or middle-aged adults) as well as minority and/or special needs groups (e.g., users with cognitive impairments or English as a second language) is unclear.

Information is presented in varied formats, including: brief text (i.e., “stories” delivered as if being sent via brief text messages) and videos (e.g., Carole Dweck presenting the idea of “Mindsets” in a ten-minute video or a two-minute “What is Mindfulness” video). The information is incredibly concise, especially compared to how long therapeutic explanations of CBT concepts can get. Further, a user can often decide if they want more explanation (e.g., selecting “Got it” vs. “Tell me more” when presented with new information). Also of note, the majority of interactions with the app are layered in empathetic and validating statements. The app also utilizes the user’s name frequently (making statements feel more personal) and often “forces” users to offer praise to themselves after completing tasks on the app. For example, in response to the app sending the message: “Magic! You’re doing great,” the only response option the app may provide is “I sure am!”

Woebot also includes frequent mood tracking. This mood tracking is varied, including: 1) occasional administration of Patient Health Questionnaire items (i.e., a set of questions measuring depressive symptoms that people are likely to answer in their doctor’s office; Kroenke, Spitzer, & Williams, 2001); 2) asking for quantitative ratings around anxiety (e.g., rate your anxiety from 0 to 5); and 3) selecting emotions to characterize how one is feeling on a given day (e.g., happy, sad, content). This last option is graphed for users to see “your mood over time.” However, when viewing mood over time, moods are represented on a graph in a way that implies that certain moods have different quantitative values. For example “tired” is represented on the graph as being at a lower level (i.e. “worse”) than “okay”, which may not match how a user would rate their mood. Finally and consistent with CBT practice, the app also often assesses changes in mood following activities, such as mindfully deep breathing.

The information provided to users appears clear and appropriate for young adults with stress and wellness concerns. I did not have a single interaction with the app that seemed to stray from the “spirit” of CBT. However, the app does not clearly specify who should use the app and which tools or types of interactions with Woebot might be best based on what’s going on in a user’s life. Some users might therefore wonder if they are using the app in ways that will be most helpful for them, or if they might need a higher level of care. Further, as the app notes to users when they open the app for the first time: no human is monitoring the live conversations. This means that when Woebot allows users to enter “free text” (i.e., write in your own response), that the feedback that is provided might be discordant or incomplete. For example, in learning and practicing the CBT-based skill of thought challenging, I entered in a thought that I have had many patients share with me in therapy. However, since Woebot could not “read” and respond to this thought, the feedback it was giving was not a great fit with the type of challenging the thought would need. After asking me a few follow-up questions, it essentially apologized that we couldn’t figure that one out and moved onto another task.

Despite the initial screens that appear after download explaining that one simply has to type in “SOS” to receive external resources if in a crisis, this information can’t be found anywhere within the app. The app’s emergency settings can be triggered from conversations, for example use of the word “crisis” will trigger Woebot to assess if the user or someone they know is in crisis. Woebot can sometimes get in feedback loops. If it does not compute what a user puts in or an interaction gets interrupted (e.g., by taking a break to check email), it can start back over with the same questions. While understandable when interacting with a robot, some users might get frustrated by the repetition. Finally, given that the app uses videos as one means of providing information about CBT-based topics, it is surprising that there are no video/audio options for mindfulness practices. An option to “hear” these instructions would likely better promote the practice.

The app is attractive and has a good look and feel that mimics a texting environment. Elements are displayed appropriately, and all previous information may be found by scrolling. Further, the varied response options, like the use of emojis and gifs, are engaging. I did note one typo (“So, [Name], were you doing just now?”), but for the high amount of text exchanges that occurred, one typo is pretty excusable. In clicking a specific “story” (e.g., “Are labels bad for us?”), users can revisit a previous lesson. However, each time this occurs, it is a new interaction rather than allowing a user to revisit what their previous responses were.

Overall, I enjoyed using Woebot. I found its methods of incorporating CBT into an environment that mimics texting with a robot “friend” to be both creative and sound for young adults with stress and wellness issues. Further, the interjections of random images (e.g., a picture of a cute dog) or corny/punny jokes were engaging and funny. These interjections were also often the “hook” of push notifications, which encourage a user to open the app frequently. Woebot also incorporated large amounts of validation, empathy, and hopefulness that many users would likely appreciate. That said, those who are feeling a bit irritable might not appreciate the gentle humor and enthusiasm of Woebot. Also, those with more severe symptoms (e.g., Major Depressive Disorder) would likely require a higher level of care to help guide and reinforce these CBT skills.